During one of his missionary journeys St. Paul visited Ephesus in Turkey.
He stays in the city about three years (Acts 19:1-20). In Ephesus Paul discovers twelve believers who were baptized but who did'nt as yet have God's spirit. Paul baptizes them in His name and they receive God's Holy Spirit (Acts 19:1-7).

Turkey is called the Other Holy Land as it has more biblical sites than any other country in the Middle East.
Antioch - the place where the followers of Jesus were first called Christians; Tarsus - where Apostle Paul was born and many others..

Another question which disturbed the Church during the last quarter of the fourth century concerned the interpretation of the relation between the divine and human natures of Christ. The First Council of Nicaea (325) had declared that 'Christ is truly God' against Arius and everybody 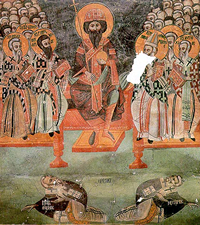 had agreed with this statement. In the First Council of Constantinople (381) while this clause was repeated, an already accepted dogma that 'Christ is truly man' was added on behalf of Anatolia and Syria and it bore an emphasis on the humanity of Christ.

By the beginning of the fifth century the definition that Christ was both God and man or 'wholly God and wholly man' began to raise some questions. Did Christ have a split personality or if not, was he two persons? This question became the seed of a bitter quarrel between Alexandria and Antioch. Although none of these theological schools opposed Christ's oneness, in accordance with the religious background of their theological school, they were indispensably compelled to weaken one nature of Christ for the benefit of the other.
The Alexandrian school, led by the patriarch Cyril, with its deep belief in the redemption, emphasized Christ's divine nature. The school of Antioch, without dispossessing Christ's redemptive power, saw him as the ideal human and Christian model of man and thus stressed his human nature. The founder of Antiochene theology was Theodore of Mopsuestia (Misis near Adana). Nevertheless when events took a irreversible turn his flag was held by Nestorius. The latter was born in Germanicia (Mara~) and except that he was a monk and a frequent speaker at Antioch's cathedral, 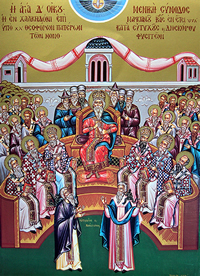 not much is known about his life. In 428 Nestorius was appointed patriarch of Constantinople.

Nestorius believed and preached that Christ had two distinct natures, one human and the other divine. Otherwise one could not speak of God as 'a baby two or three months old.' Also by the third century the application of the epithet 'Mother of God', or Theofokosto the Virgin had become common especially in the eastern lands of the empire and spread to Constantinople and the West. In Antioch the epithet was not used popularly and for a member of the Antiochene theological school, which defended the complete humanity of Jesus, it suggested that the divine nature was born of a woman, which was disturbing. In the capital Nestorius bringing together those who called the Virgin Mary 'Mother of God or 'Mother of man' suggested that she should be called 'Mother of Christ,' a term which represented both God and man, as used in the Gospels. Shortly after these sermons Nestorius found himself accused of heresy by Cyril of Alexandria.
The dispute over theology however had also deep political undertones because Cyril was convinced of the superiority of his Apostolic see of Alexandria over the Church of Constantinople, which was the most recent among the major sees. To this the long-standing theological rivalry between Antioch and Alexandria must be added. In 429 Cyril denounced Nestorius for heresy and accused him of denying the deity of Christ and thus appealed to the emotions of the orthodox Christians. In 431 Thedosius II had to summon a council in Ephesus to find a solution to this problem. 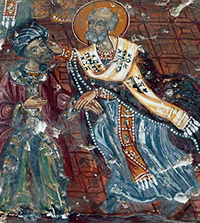 The meeting began at the church of the Virgin Mary whose ruins have survived to the present. Cyril assumed the presidency and accused Nestorius of teaching that Christ was merely an inspired man. Cyril's agents had spread the news that the reason why Nestorius disliked the title 'Mother of God' was that he did not believe that Jesus was God. Cyril and his party, without waiting for the arrival of John the patriarch of Antioch, who sided with Nestorius, declared the latter a heretic and excommunicated him. Rome supported the decision. The patriarch of Antioch upon arriving at Ephesus held another council and excommunicated Cyril. Theodosius II, although favoring Nestorius, was compelled to depose both leaders. Cyril, however, bribing his way out of prison with his Church's money returned to Alexandria. Nestorius was exiled to his monastery near Antioch, then in 435 to Petra and a few years later to the Libyan desert where he died in 450.
After a short while the Alexandrians began to be called Monophysites. The followers of Nestorius were identified first with the word Duophysites and later Nestorians. The moderate theologians and politicians of the period attempted to bring together the Alexandrian and Antiochene schools. Cyril of Alexandria and John, patriarch of Antioch, under pressure from the capital established a pretentious truce. This peace did not last long but fell apart as soon as new bishops took the place of the old ones; for John died in 442 and Cyril in 444. In order to establish a peace between the Churches of Antioch and Alexandria only two years after the council Cyril had declared a formula of re-union which also agreed with the Antiochene theology. Not to offend his previous supporters he accepted the phrase , union of two natures', which became 'one nature after the union.' For a time each 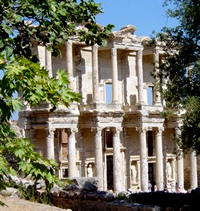 party had to seem to consent to the situation even if under strain. In 449 Theodosius II was compelled to call another meeting at Ephesus. This time it ended up with the confirmation of the Monophysite cause. This meeting was referred to by Pope Leo I, the Great, as a 'den of robbers,' atrocinium, and thus was known as the 'Council of Robbers.'

Nestorianism, nevertheless, found fertile soil outside the empire. As early as the sixth century there were 'Syrian Christians' or 'Assyrians' in lands as far apart as India, central Asia and China. The Church of the East was popularly called the Nestorian Church even though its teaching has never been Nestorianism. They established a theological school at Nisibis (Nusaybin) and a patriarchate at SeleuciaCtesiphon on the Tigris. They were protected by the Persian kings who were the enemy of the Byzantines. In the course of time while some of them turned to the Roman Church some turned to the Monophysite doctrine which was the opposite of Nestorianism. At present a limited number of Nestorian Christians live in Iraq and neighboring lands.
By the end of the fourth century Christianity was divided into three main Churches: the Church of the West (Rome and Constantinople), the Church of the East (Persia) and the Church of Africa (Egypt and Ethiopia).